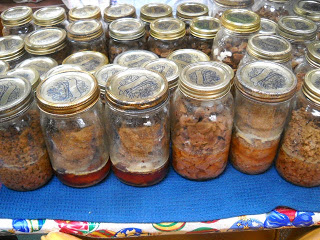 When you cover meat with broth or water and then run it through your canner, the meat will be tender and juicy.  That's a good thing for most meat.  If you're going to use it in stew, soup, or gravy, it's excellent.  But if you want to use ground meat for things like spaghetti and tacos, it'll leave the meat soggy no matter how much you try to fry the water out of it.
When you make hamburger or sausage patties and can them covered with liquid, the burgers will likely crumble as you lift them out of the water.  In our opinion, it also boils the flavor out of the meat.
A few years ago I heard about something called  'dry canning', a technique for canning meat.  Now it's the only way I can burgers and ground meat.  Sometimes I can stew chunks and roasts that way too, but they do okay with water or broth over them. 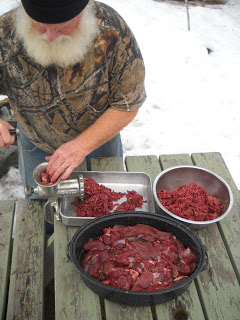 Most of our meat-canning starts like this.  It's usually an animal we've raised or hunted.  This particular animal is (was?) a buffalo.  Some people are squeamish about this part of it, but to me it's part of the package of being self-sufficient.  I also like knowing that the meat I ate had a good life, wasn't confined, and didn't spend time in a feedlot being pumped full of anti-biotics or hormones or anything else.  But this post isn't an argument for home-grown or wild meat. 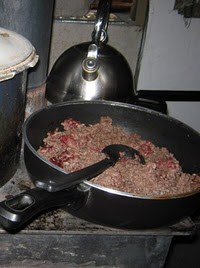 Regardless of how you acquire your meat, the first thing to do is prepare it for canning.  In this picture I'm browning ground meat on our woodstove. 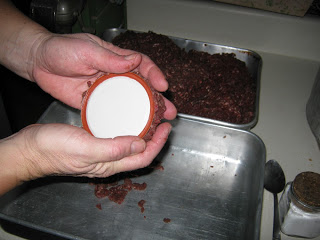 While the ground meat was browning I made burger patties out of some of the rest of the meat.  I use a canning lid from a wide-mouth jar as a sizer.  I want the patties to be about the size of the diameter of a wide-mouth jar. 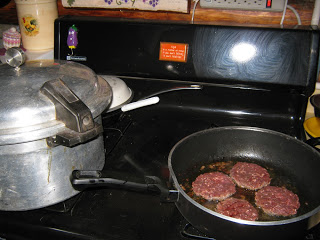 Then I brown them on both sides. 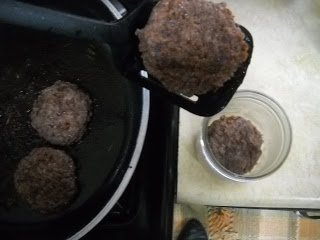 Once they're browned I drop them in jars, stacking them until the jar is nearly full. Now that they're browned they've shrunk a little bit and they fit perfectly in the jar. 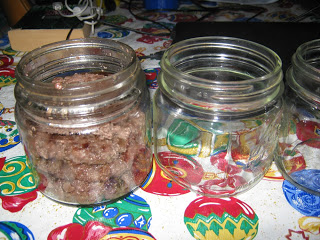 I don't have many of these jars. They're a short pint with a wide-mouth.  I can fit four nice-sized patties in them, which is just right for my husband and I.  If the kids or grandkids are here, I can use a quart jar of patties, or a couple of jars.  Eight patties fit in a quart. 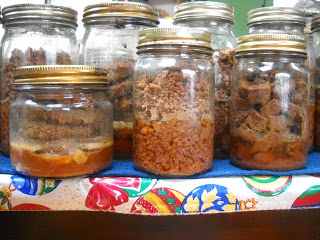 From left to right I've canned burger patties, ground meat, and stew chunks.
Even if you don't add any water there is moisture in the meat.  You can see that it has pooled in the bottom of the jars.  This meat had been frozen and thawed before prepping and canning it, so I think it had more moisture.  Sometimes if the meat is exceptionally dry I add about half an inch of water to the jar.  It steams through the meat as it cans and keeps the meat moist.  I canned a batch of dry stew meat with no added water and the top inch or so was dry and somewhat hard.  I had to soak them in water.  So I think a little bit of water helps.
Most of the meat we can is lean, so fat isn't an issue.  However, we can bacon and sausage, which can be fatty.  Dry-canning is good for these foods because they're not as likely to boil over as high-fat meat, which can lead to jars not sealing properly. 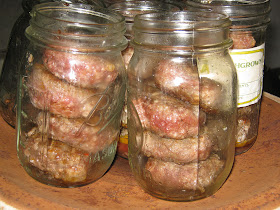 These are browned sausage patties ready to be canned.  I make the sausage patties smaller and fatter, and I put them in regular mouth pints this time.  Generally it's hard to get the meat out of a regular mouth jar, but I was out of wide-mouth jars so I used what I had. Since the patties were smaller, they weren't hard to get out.  I put about 1/2 inch of water in the jars before I canned them, but I didn't need to add salt or anything else.  Sometimes I can a blob of ground sausage instead of patties and use it for sausage gravy with biscuits, but usually I make patties and if I want some for gravy, I crumble them up when I use them. 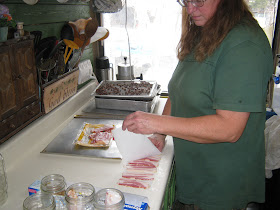 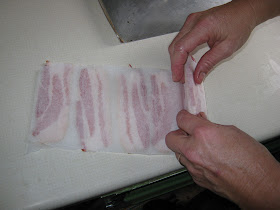 Now I roll is up.  I cut the strips of bacon in half before I put them on the wax paper so they won't be as long.  You can fold the bundle in half after you roll it up if you don't want to cut the strips.  I shove the wax paper bundle of bacon strips into a jar and can it like that, nothing extra added.  When you go to use it, carefully unroll the wax paper, lift the strips off and into a pan.  They're fully cooked in the canning process, so all you have to do is heat them.  You can eat it right out of the jar, too, if your power is off or if you're camping and don't want to heat it.  It's great on sandwiches or burgers.
You can also just shove the bacon in a jar and can it, but you'll never get it apart.  I can some in half-pints and we use them in omelettes, as bacon bits on salads, in stir-frys, or added to homemade baked beans or bean soup.  Without separating them with waxed paper they pretty much crumble into pieces, but they're delcious. 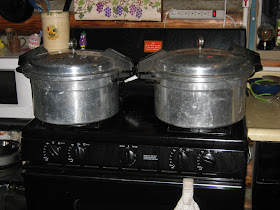 100 minutes at 10 lbs. pressure if you're under 3,000' of elevation
100 minutes at 15 lbs. pressure if you're over 3,000' of elevation
(Some canning guides say 90 minutes)
Follow the standard canning prodecures of putting the lids in hot water to simmer, etc.
Storing canned meat:
The best place is cool and dark with a steady temperature.  If you have cabinets in a back room or basement, those are good.  Try to avoid excessive moisture, such as a damp basement or root cellar.  The lids and rings will rust, which could make it hard (or impossible!) to get the rings off.  If the rest gets bad, it could rust through the lid, but that's rare.  A dry root cellar or basement are okay.
You can put the jars back in the box they came in, or find a box from the grocery store, and push them under your bed.  Dry-canned meat doesn't have to be protected from freezing.  Meat canned with water or broth can't be allowed to freeze because the liquid will expand and could break the jar.  That's why it's safe to put dry-canned meat in an unheated shed or garage in cold climates.
Light is the enemy of fat, and even lean meat has some fat.  That's why it's not a good idea to store them on shelves that are open to light, such as a basement with windows.  If you want to store them there, consider stapling or tacking an old sheet or blanket across the front of the shelves.
Shelf life
Shelf life is tied to how you store it.  In ideal conditions of dry, dark, cool, steady temperatures, and if you've been diligent about safety and following instructions while canning, it's probably safe for 10 to 20 years.  Definitely safe for five years, if you're very sure they were processed the full length of time at the right temperature, and if you're sure the jars really sealed on their own and you didn't get antsy and tap them and the lid popped down but isn't really sealed.
If you're unsure, try to use them up within two years.  Take a quick sniff and look it over when you open the jar.  If the flavor is off or you're suspicious about anything, throw it away.  The contents, not the jar.  The jar can be washed and boiled, and reused.  Never, ever, reuse a canning lid, especially for meat.  Some people take a chance when they're canning things like fruit, but it's not recommended.  Don't take a chance on it with meat.
I'll be happy to answer questions about anything I neglected to include here, or track down answers if I don't know the answer.
Susan
povertyprepping@yahoo.com
﻿
Susan at 12:05 PM
Share